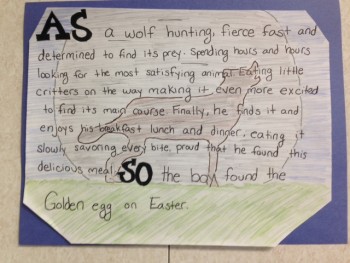 In a last-ditch effort to convince their teacher that pop culture hasn’t entirely ruined the word “epic,” East Lake 7th graders penned their own original epic similes patterned after the classical models found in Homer’s Iliad and Odyssey.

The class studied examples of the epic simile in context and analyzed its “As a, Thus b” structure to see how it creates an impression of tension and release. After sharing their initial ideas in class, students came to see that the epic simile acts very much like a riddle: the long and sweeping “As a” part luxuriates in detail to extend the reader’s curiosity, and the terse “Thus b” section relieves that curiosity and brings things to a close.

Students then worked crafted their own similes, and the results were, well, epic. Topics ranged from a child throwing a temper tantrum (Gozilla rampaging through a city) to two sisters about to battle for the last cookie (Spaghetti Western showdown) to the joy of discovering money in your pocket (finding the lost city of Atlantis). All twelve 7th graders did Homer proud.