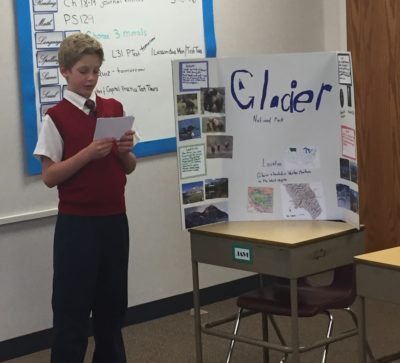 Fourth grade is the year when our students learn about the United States of America. As an extension of this, each student was assigned a national park to research. They began by writing a formal letter to their assigned national park, requesting information for their report. After receiving maps, books, etc. from the park, the research began. Along with the packet received from the park, students used library books and the internet to gather all they needed to create a report. Each report included the park’s location, history, features, land forms, activities, and fun facts. After the research was completed, the next step began. The students were asked to construct a presentation board which would catch the audience’s attention and include the information they had gathered for their report. The climax of this project was presenting their report orally for our visitors during our Grandparent’s Day celebration at the school. The audience was impressed with the hard work the students had put in to making their boards, and writing their oral reports. They also commented on how well the students performed, speaking in front of an audience. When asked what their favorite part of this project was, one student expressed, “I really liked receiving information from my national park. I also liked learning about everyone’s national park. I didn’t even know most of them existed.”