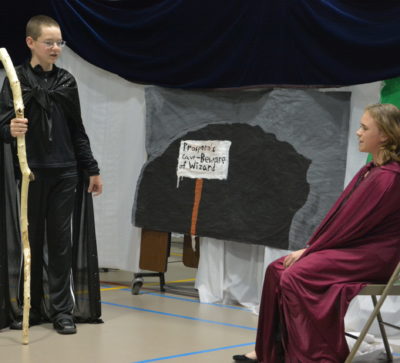 On Thursday, April 21st, the East Lake Academy middle school put on a show for the ages as they celebrated Shakespeare on stage.  Performances included the 6th grade’s “Scenes from A Midsummer Night’s Dream,” the 7th grade’s “Scenes from the Tempest,” and the 8th grade’s modern, cell-phone infused adaptation of Romeo and Juliet.
The night started as the 6th grade bombarded the stage with puckish mayhem.  Done differently than in the past, this year’s version of MND had 6th graders starring in individual scenes to highlight their impressive acting chops.  Also new to this year’s version were the “Puck Twins,” Jane Calk and Will Winemaster, who shared a starring role normally reserved for one.  “It was fun being able to ‘misbehave’ on stage,” Calk chuckled, with Winemaster adding, “And sharing the role meant fewer lines to memorize!”  Mariana Quiroz admitted that she was “kind of nervous” the night of the performance, but soon found her acting legs: “Once I got on stage, everything flowed free!”  Isabella Pagano also found acting refreshing, but for different reasons: “My favorite part was that we all got to act like fools on stage!”
Next up were the 7th graders, whose “Scenes from the Tempest” took a difficult play and made it understandable for a modern audience.  Julia Birmingham confirmed this by saying that the acting “turned an otherwise kid-unfriendly play into an adventure, one that I will never forget.”  The entire class did an outstanding job of projecting clearly and commanding the stage, traits that have their roots in East Lake’s mission to build self-confident leaders.  Emma Conarchy enjoyed the camaraderie involved in putting on the play: “I think the best part of Shakespeare Night is how we all work together…It helps us all come together, but we also get to do something great individually.”  Zoe Audu agreed: “I loved watching my peers perform and seeing the natural talent of so many students!”
The night reached a dramatic crescendo with the 8th grade’s modern adaptation of Romeo and Juliet.  Instead of Montagues and Capulets, the stage was flooded with Ramblers and Corsairs.  Hoodies and cell phones were everywhere, and cheesy 80’s power ballads provided an appropriate soundtrack to the action.  8th grader Peter Harrigan, home schooled until this year, liked the pre-production work involved in the show: “I enjoyed the preparation that went into putting together Shakespeare Night.  It was fun and useful to do.”  Siena Finlayson had a different take: “I think the best part about Shakespeare Night was making the audience laugh.”  The surprise of the night came during the this performance when  Mr. Losch exploded onto the stage in an unforgettable cameo appearance.  Tasked as the play’s grumbling authority figure and determined to stay in character, the mild-mannered mathematician ad-libbed perfectly when he found his path to the stage blocked by elementary-aged groundlings, barking “Outta my way!” and receiving raucous applause for his efforts.
All in all, the night was a great success and an eminently appropriate way to celebrate the 400th anniversary of our greatest writer’s death in 1616.  Such events don’t happen without the help of many, though, and the Middle School would like to extend its deepest gratitude to the following people: Mrs. Amy Pagano (set procurement and design), Mrs. Maureen Shinnick and Mrs. Kristin Makowski (set up), Ms. Annie Murphy (Bottom’s hat), Mrs. Cindy Winemaster (refreshments), Ms. Erica Plys (costume help), and Mr. Harold Harpold (photography).  Thanks as well to all the parents who helped with props and treats, or who simply tolerated the flood of early-Modern English that came home with their children each night.
0Shares
PrevNext