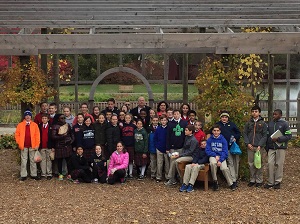 East Lake Academy’s sixth through eighth grade students very much enjoyed their recent field trip to Cantigny Park, which is located in Wheaton, Illinois.  They were accompanied by helpful parent chaperones Mrs. Calk, Mrs. Conarchy, Mr. Mons, Mrs. Quiroz, and Mrs. Winemaster.  Teachers Senora Gonzalez, Mr. Nuccio and Mr. Stack were also on hand.  The East Lake Cantigny contingent is grateful to Mrs. Winemaster for generously purchasing hot chocolate and cookies for the group.  Colonel Robert R. McCormick gifted Cantigny to the public “as a public space for education and recreation.”   At Cantigny, we walked through history by taking a guided tour of an historic house museum, a military museum, an education center and award winning gardens.  The guides were knowledgeable and we learned a great deal.  The First Division of the Army Museum is surprisingly detailed, containing many useful interactive exhibits, and it has a section devoted to every war in which the United States has participated since the Civil War.  We were reminded of what our country has been through and the sacrifices so many have made for us.  The students especially enjoyed climbing on the World War I, World War II, Korean War, and Gulf War tanks outside the museum (the ground around the tanks is filled in with soft rubber chips to make it safe in case a student were to slip).
Eighth grade students have worked this academic year to develop their leadership skills and put them into practice.  One way they have done so is by preparing presentations based on the established East Lake Academy Virtue of the Month campaign.  After writing and practicing a lively and age appropriate presentation of approximately ten to fifteen minutes, eighth graders have helped to bring the monthly virtue to life in teachings to Kindergarten through fifth grade classes.  More particularly, in an interesting and interactive manner, they have lived out and presented the virtues of loyalty, responsibility, generosity, and vigilance.  They used puppet shows to good effect in teaching about the virtues of generosity and vigilance.
The diligent academic work of Middle School students continues to bear good fruit.  For example, sixth grade student Mariana Quiroz’s drawing depicting SCARCITY for the 2015-16 Econ Illinois’ Economic Concepts Poster Contest has been named one of the regional winners.  This Fall, a couple hundred students in grades first through eighth participated in Dominican University’s regional competition.  Mariana was named one of the regional winners.  This May, Dominican University will be holding a reception for Mariana and the other regional winners.  Mariana has advanced to statewide competition.  In March, Econ Illinois will announce the state winners.  Congratulations, Mariana.  It is fantastic to see your careful work awarded.
0Shares
PrevNext