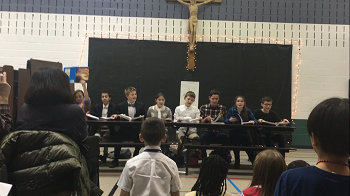 “Hay que aprender” or “We have to learn” was the final song of the 7th Annual Spanish Heritage Night at East Lake Academy. Sung by the Class of 2016, this new twist to Queen’s familiar tune “Another One Bites the Dust” described the trials of being a busy student. Before the Finale, the 8th grade presented their version of “La voz en español”. Performances included entertaining versions of many popular songs and of course, special appearances by “guest judges” from the “The Voice.”
Seventh grade skits were a hit with three student-written stories about Superheroes and Villains, a timely Presidential Election mishap and a fun adaptation on a familiar fairy tale of the “Three Little Pigs.” The sixth grade spent time researching different Hispanic Holidays and helped clarify the similarities and differences between Christmas and “el Día de Reyes” in Mexico and Spain. While another group explained that “Cinco de mayo” is the celebration of the independence of the city of Puebla from the French and not the Independence of the country of Mexico. Following the various presentations, the sixth grade jumped into sing the Spanish version of Kool & the Gang’s “Celebration”.
The fifth and fourth grades recently completed their studies on Puerto Rico and Spain and performed songs that were both humorous and charming. “El pollito pío” by Pulcino Pío was charming and fast paced just like the fifth grade. Students portrayed different farm animals, farmers, even a tractor to teach us that animals in Latin-American countries make similar but different sounds. Finally, in their first evening performance the fourth grade warmed our hearts with an adapted version of “Vamos a la playa” made famous by Los Payos. From their costumes to their dance moves, they revved up the audience for what was to be a fabulous evening.
As always, the evening culminated with a buffet of Hispanic dishes and pastries, prepared by fourth – eighth grade families for all to enjoy. Parents, students, and many alumni enjoyed catching up while enjoying a sample of the many dishes. What a wonderful way to celebrate Catholic Schools Week and Spanish!