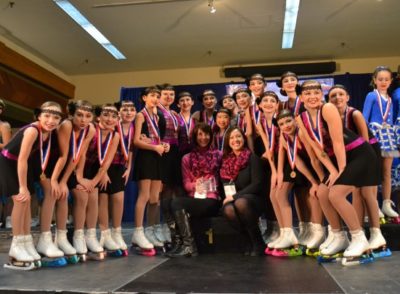 ELA 6th Grader Gigi Young Wins Midwest Section Championship for Synchronized Ice Skating
Gigi’s enthusiasm for ice skating began when she was 7 years old.  She began competing in solo performances and later decided to join a synchronized skating team and fell in love with the sport.  Since then, she has spent several hours each day training on and off ice to stay competitive.  Skating has been a HUGE commitment and has required tough decisions with time management to balance school and skating.
What is synchronized skating?  It is a discipline of figure skating that consists of 8-20 individuals skating together as a team, moving as one unit at high speeds while completing difficult skills, footwork and choreography.  A synchronized skating team wears matching costumes and make-up, and they develop a themed performance to music.  This year, Gigi’s team skated to music from the Roaring 20’s (The Charleston).
Gigi skates with the Starlights program out of Vernon Hills and this year her team qualified to compete in the Annual Midwest/Pacific Sectional Championships in Portland, Oregon.  Her team had a last minute injury and Gigi stepped in, learning a new spot in a matter of minutes and helped her team advance to the final round after receiving seven perfect scores.  They then competed the next day with a flawless program resulting in the team winning the Gold medal.
There is no better sport than synchronized skating that defines the word ‘teamwork’.  Synchronized skating teaches self-discipline and dedication, it builds confidence and self-esteem, it promotes good sportsmanship, and it creates strong friendships because the skaters must depend and trust each other in order to be successful.  We are so proud of Gigi and all that she has accomplished because of her hard work and perseverance.
ELA 5th Grader Carina Matuszewski and the Glenview Stars Capture the Presidents Cup
Carina started skating the week she enrolled at ELA in Miss Sponseller’s kindergarten class. Carina loves hockey so much because it’s fun, it’s fast, and it’s exciting.  She also really enjoys it for the comradery – “you make great friendships with your teammates because you can’t do everything on the ice no matter how good of a skater or shooter you are; you have to rely on your line mates and teammates for the team to be successful.”
In pre season Carina skates 3-4hrs per week to get back into the swing of things.  Once regular season begins, practices are 2 hours a week with a game or two added on the weekend.
Carina plays with the Glenview Stars U10 girls hockey team, an Illinois Tier II Amateur Girls Hockey travel team, as their 2nd line Right Wing, averaging 1 goal/game.
The Glenview Stars are in the the Northern Illinois Hockey League (NIHL) conference and they play teams from as far north as Kenosha, as far south as Crestwood, and as far west as Naperville.   It’s been a fabulous season for Carina and her team.  Most recently, they captured the Northern Illinois Hockey League’s Presidents Cup and Wolves Cup.  Congratulations Glenview Stars!
ELA 8th Grader Sonte Turnage looks ahead to the 2020 Summer Olympics
Click here to hear more about Sonte.
0Shares
PrevNext